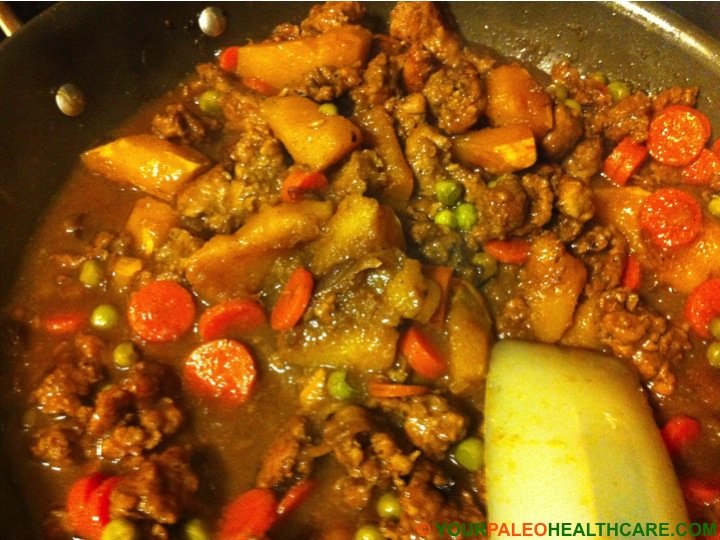 Have you ever craved something that you haven’t had in a long time?  Well that happened to me over the weekend. I just had to have japanese curry – also known as karei raisu.  I have particular memory of hitting up CoCos in Chatan Cho right outside Gate 2 Street next to Kadena Air Base Okinawa Japan. Breakfast, lunch, dinner.  It didn’t matter this is where you went for curry, well and that little curry house down on the Sunabe Seawall where you could watch bastardized croquet at sunset. It looks like you can get CoCo out on the west coast now, but I’m out east, and can’t handle anything with MSG or wheat, so if I wanted some Japanese Curry (karei raisu) – I was going to have to whip it up Paleo style!  I modified the original recipe from norecipes.com.  And it is the BOMB!  CoCo’s better prepare for a throw down!  Here’s how I made Paleo Japanese Curry (karei rasiu)! 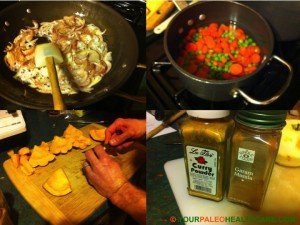 Start of by caramelizing the onions in your fat of choice.  I used bacon fat as ground sweet italian pork sausage was the meat of choice.  I sliced the onions in small wedges and let them ruminate in the bacon fat over medium heat stirring every 3-5mins.  While the onions were cooking, I prepped the carrots, and tossed them and some frozen peas (there are members of my family that are obsessed with peas- you can leave them out if you’re strict paleo)  in a pot of water with some salt to get them started. Meanwhile my husband helped be cut up the  carnival squash we had laying around. Kudos to dh because that was one tough squash to cut up and peel away the rind uncooked. 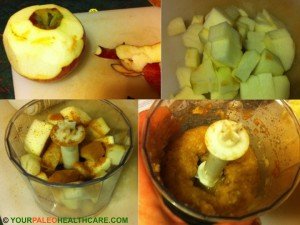 Next I peeled and cored the apple.  I cubed it up, tossed it in the braun hand blender with a dash of garam masala and curry, then set it aside. By the time all of this was done the onions were a beautiful golden brown so I set to work on stripping the ground sweet italian sausage from their casings and dropped them into the pan to begin browning the meat.  Once the meat was cooked, poured the pan of carrots and peas, along with the water into the pan I caramelized the onions and browned the pork.  Then I tossed in the squash and some more curry and garam masala – because with karei raisu you can never have enough of either in my opinion.  I covered the pan and set to work on the roux.

I should let it be known that even before I went gluten free, then paleo – I never was good at making roux. And the first batch of the curry roux didn’t turn out all that well either.  If you’ve ever tried to make anything using tapioca flour, you know a little goes a long way!  So in my wisdom – I cut back the original recipe from 1/4 cup of wheat flour to 1/8 cup tapioca flour.  Well after about ten minutes I had a nice gelatinous bit of goo that wasn’t going to make the grade.  For all you tapioca experts – go ahead and laugh! 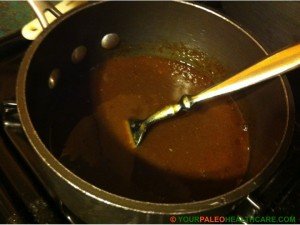 So I started over.  This time I went SMALL!  I put ghee in the sauce pan, and added 1tsp and began whisking. As it began to thicken I added garam masala, and curry.  Once that was blended in I added the paleo ketchup and the coconut aminos.  I then tasted. I added MORE garam masala and curry because you can never have enough!!!!  At this point I checked the large pan to see if the squash was tender.   Since it was I began ladeling off the water in the main pan and whisked it in with the roux.   I transferred all the water and the result was a creamy curry sauce that was AMAZING!

Once the curry sauce was made, I poured it over the curry itself and mixed it all together. I severed this up to the family in bowls by itself.   Next time I’ll be serving over cauliflower rice.  It got two thumbs up from Chaos and Havoc. Japanese Curry (kaeri raisu) was the BOMB!  They even asked for it to come into our regular meal rotation, which I’m very happy about.

I hope you enjoy this as much as I did!