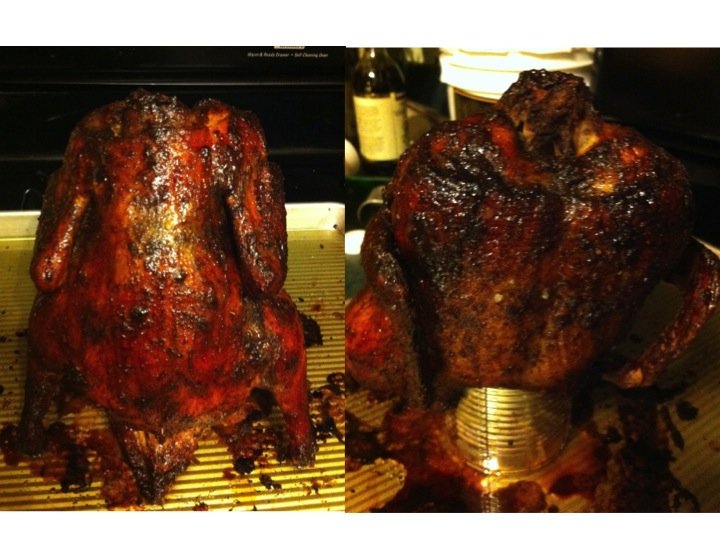 I don’t know about you but I love Chinese food.  My favorite dish is Peking Duck.  I haven’t had it since going paleo. Several weeks ago I had a craving for it and COSTCO just happened to have a sale on organic duck.  So I picked one up.  It stayed in the deep freezer until I had some free time to look up recipes I could modify to make paleo peking duck. I found my inspiration from J. Kenji Lopez-Alt at Serious Eats.  So here’s what I did after I defrosted my bird.

First I dusted the entire bird with a baking power and sea salt mixture to help ensure crispiness of the skin through dehydration. Next, I set the duck on a plate uncovered in the refrigerator over night.  This dehydrated the exposed part of the bird very well, but the underside was still rather juicy.  Next time I plan to have the bird positioned on a can of coconut milk to achieve maximum exposure to support dehydration.

I pulled the duck out of the refrigerator  after 24hrs of dehydration.  I put a pot of water on the stove to boil and  I began pulling the skin away from the duck.  Once the water was boiling I poured it over the duck while it sat in a strainer in the kitchen sink.   Then I put the duck back in the refrigerator for another 4 hours to continue the dehydration process.   I did all this in the span of a day and half.  Next time I make paleo peking duck, I will allow the duck to get throughly dehydrated in two 24-hour periods.

Around noon I preheated the oven to 300 degrees.  I pulled the duck out of the fridge and set it up on a can of coconut milk filled with water.  The water provided stability to the can so the weight of the duck wouldn’t fall over.

Now that I had everything all set and ready to go I had to figure out what I was going to do for plum sauce.  Its not like I can go out a buy that stuff paleo friendly.   Most of that stuff has wheat in it.  No thanks.

So I started scrounging around my pantry.  GOLD MINE!.  I found 5 dried plums that had probably been sitting in that pantry waiting for this day.  Then I went to google to figure out how to make the plum sauce from scratch.  Of course everything calls for soy sauce and msg.  So I took the best of the recipes and cobbled them to make my plum sauce. So you need the following for your plum sauce:

Put the dried plums and water in a small sauce pan over a high heat.  This will reconstitute the plums.  After the plums are reconstituted, reduce the burner to medium heat and reduce the water by half.  Add in your garlic and ginger.  If you don’t have fresh garlic or ginger the powder forms will work as well!  Then 1-2Tbs of Coconut Aminos or Tamari.   I didn’t have any Coconut Aminos in the house so I used Tamari.  Then I added the honey to bring out the sweetness of the plums.   The flavors popped in my mouth when I tasted the end result.  I could swear I was in the back of some Chinese restaurant it was that good!  I’ve used this plum sauce when we make MuShu Pork.

Note: *Tamari is a premium fermented soy sauce that is gluten free.  While not 100% paleo there’s such a small amount that I just went with it since I didn’t have the Coconut Aminos or the time to run out to Whole Paycheck to pick up more.

I let the duck rest for about 20 minutes before letting my husband break out the carving set.   Chaos and Havoc were circling like vultures and went bananas when they actually got to taste as the duck was prepared for eating!  After that first taste I only had to ask them once to go sit at the table for dinner.   THAT NEVER HAPPENS!

I served the paleo peking duck with my famous bacon and brussel sprouts.  Chao and Havoc asked for seconds, thirds, and fourths. And they were so quite at dinner fully focused on noshing up that duck.  They’re only quite at dinner when they really like what they’re eating. My husband said it was supreme!  And I was in heaven.  I finally got my Chinese food fix!   Hope you enjoy it as much as I did!