In the Paleo and Biohacking worlds we always talk about N=1.  But what’s the best way to put N=1 into perspective with regards to your own health. Recently, I introduced the Quantum Health Model over on Dr. Jack Kruse’s website.  Today I’m going to show you how to leverage the model to help you figure out your next steps given where you’re at with a personal  example of the Quantum Health Model and Chaos N=1. 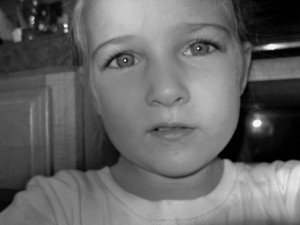 But first let me give you some background. Chaos is my daughter. She’s an adorable 5 year old – at least that’s my perspective – but then again I’m her mom. She’s got a unique N=1.  She was diagnosed with Hashimotos Thyroiditis this summer. So, we’ve got her diagnosis, but how did we end up here?

I was pregnant with Chaos, when I worked in the Pentagon the first time. I was also dealing with my own hypothyroidism at the time but didn’t know it.   Toss in the rest of my health issues, migraines, and  asthma; and she was starting off behind the power curve.  Fortunately she was born full term after a long labor.  Everything seemed to be going just great except the fact she physically wasn’t capable of nursing (we’ll come back to this).  This lead to me exclusively pumping for 15 months to provide breastmilk for her.  I did everything I possibly could to ensure she had the best start possible.  Little did I know how epigenetics works.

Chaos always was a wee-little thing.  Enough so, we called her wee-little. She always around the 5-percentile for height and weight.  Yup she’s an itty bitty thing with a gigantic personality and energy to match.  She’s a rough and tumble princess girly girl who keeps everyone around her on their toes – hence Chaos! The only major medical issue she had as a baby/toddler was Vesicoureteral reflux, which was diagnosed after a very bad urinary tract infection.   Fortunately it resolved as she got older.

But last fall she started behaving oddly.  Meltdowns happened on a regular basis, and these weren’t your typical 4-year old meltdowns,  they were reminiscent of tantrums a 1 or 2 year old would have who can’t communicate well.  We began to track her behavior and discussed it with her pediatrician during her annual check up when she turned 5.  During that appointment we asked to run thyroid labs going off of my mommy instinct. Good thing we did those labs.  They were out of range BIG TIME.

I took those labs to my PCP, as she also sees kids, to get additional labs run, as well as re-running her Thyroid labs while we waited to get an appointment with a Pediatric Endocrinologist.   It was a good thing we did b/c we ended up with a second confirmation that something was off in Chaos.

After waiting almost 5 months to get in to see the Pediatric Endocrinologist we finally had a diagnosis of Hashimoto’s Thyroiditis.  But it wasn’t the only thing that caught the doctor’s eye.  As I’ve said before Chaos is a wee bitty thing.  She runs about the 5th-percentile on the growth charts. The doctor measured her height 6 times to verify her height, he was so concerned that she’s going in for a radiograph to determine her bone age, as she’s considered “short stature” by the growth charts.  So the Pediatric Endo is looking at her growth and the hashis as a possible connection to a malfunctioning Pituitary-Hypothalamus-Thyroid Axis.  We’ll be getting the results on this in December when we return to see the Pediaric Endo.

What’s interesting is that Chaos is currently using an ALF appliance to expand her palate. According to the dentist who’s treating her she has in-efficient energetics based upon her craniofacial structure, as seen in a CT scan, which is impinging her Hypothalamus-Pituitary Axis (HPA).  His professional opinion is that this is driving the AI issues for her thyroid.  Additionally based upon his experience, our dentist thinks Chaos has snps for MTFR, COMT, VDR and TBX222 based upon her craniofacial structure.  Our dentist also told me based upon her crainofacial structure, she physically wasn’t capable of nursing – which makes me feel like I didn’t fail her because I couldn’t nurse her.  You can guarantee I’ll be taking a copy of those CT films to the Pediatric Endocrinologist in December.  We’ll also be looking at getting a 23 & me run on her and Havoc to confirm what snps they have.  It’s taken us the combined effort of a Pediatrician, my Primary Care doc, a biological Dentist, a Pediatric Endo and me to uncover what’s going on.  Some days I feel like I’m directing an orchestra!

But how does this all fit into the Quantum Health Model? 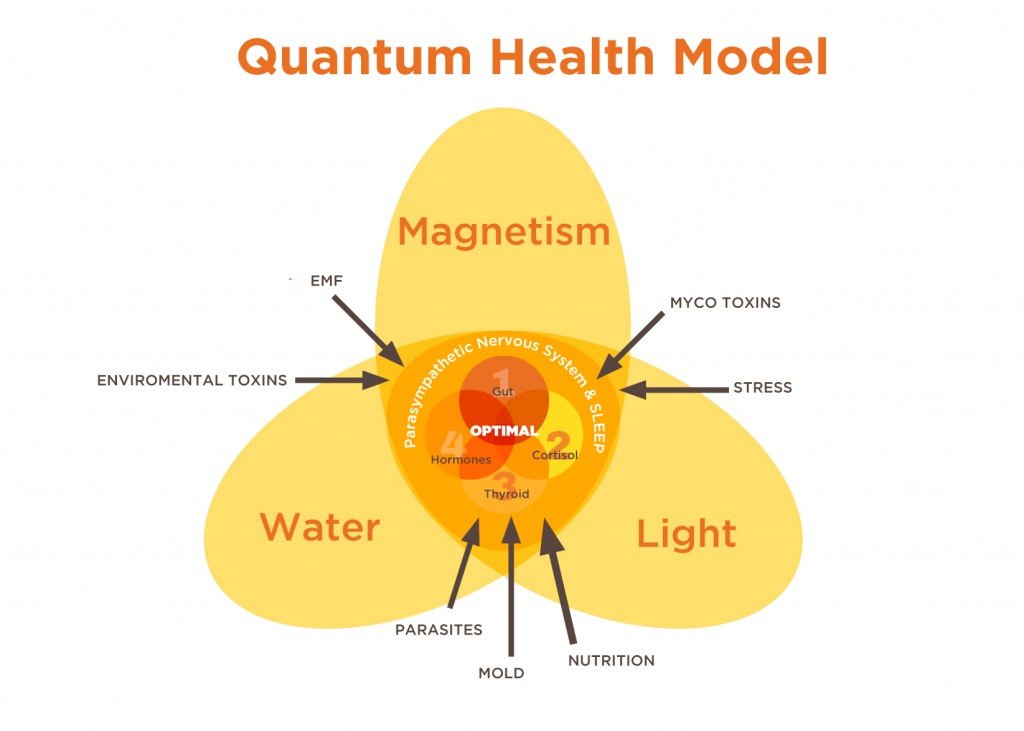 Chaos eats high fat, moderate protein, low carb (about 50-75g/day).  We’ve eliminated as much non-native EMF that we can in her environment, we’re mindful of the circadian light cycles, and she’s drinking good water.  But because of the energetic issues, she’s not capable of entering the parasympathetic nervous system, thus knocking her out of optimal.  Specifically at the thyroid, but from there its all connected. It astounds me how even her structural imbalances are directly impact mitochondrial,  brain function, as well as her thyroid health.

For those of us, like Chaos, who are off within the Quantum Health Model we can be perfect in all we do (diet, minding circadian cycles, being outside for sunlight/magnetism) but one thing can knock us out. Here’s how I think this energetic inefficiency is playing out for Chaos. First she’s extremely sensitive to Light and cold. She Loves the Winter, just like her mama; however, I think both light and cold are two of her biggest triggers.  Why? Her behavior suddenly goes off the rails during the fall, the littlest things will set her off. Light signals a seasonal change, which impacts her vitamin A production, and her conversion of T4 to T3, using iodine/iodide, zinc, copper, iron, and selenium as cofactors for the conversion. This means her vitamin A cycle is directly impacted and her body’s efforts to move toward ketosis are challenged.  Basically, her brain is attempting to tell time and space but can’t. This in turn impacts her steroid hormone cascade because both Vitamin A and T3 to convert LDL to pregnenolone.

The problem for her occurs as temperature changes and her body attempts to transition to the PPP; however,  her body can’t make the transition because she doesn’t have sufficient progesterone to support entry because of dehydration.  Her bun/creatine ratio is 65!!!  Remember you need progesterone to maintain hydration and optimal cellular function.  She also doesn’t have enough iodine/iodide to support her T4 to T3 conversion.  She needs water, iodine/iodide and fat to enter ketosis.  She need Ketosis, Progesterone, and structured water so she can enter the PPP to make NADPH+ and bypass Cytrochrome 1 and activate Cytochrome 2.

The environmental signals are telling her brain its time move to a more efficient operation using the PPP.  Her body is struggling to bypass cytrochrome 1 to leverage cytrochrome 2 but it can’t and she’s stuck in limbo.  Why?  Because she’s dehydrated she can’t support the quantum tunneling, and the proper unfolding of proteins to leverage the water in the mitochondria to power cellular functions like a superconductor, she’s stuck in basic survival mode, looking for the quickest route to energy, any energy – to include sacrificing higher functions in exchange for survival.  As long as she’s functioning in survival mode, she will continue to be out within the Quantum Health Model.

So, now my efforts are focused on making sure we’ve addressed everything in the Quantum Health Model. I also need to focus on getting her out of the survival mode she’s currently operating in and get her into parasympathetic nervous system so she can begin to heal through autophagy during sleep; while, focusing on eliminating the crainofacial structure imbalances using the ALF, and addressing her hashimoto’s.  We’ll also begin looking at her hormones based upon the results of the radiograph bone age test.  From there we will also address gut health and do what we can to bring that back into alignment with everything else.  I think once we fix all this, we’ll see her come out of the stressed state she’s currently living in and we’ll see improvement in everything.